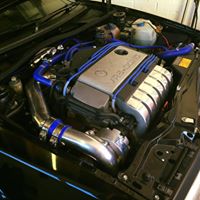 Iv had an exciting week. It's back. Had a call from stealth last Friday to say it's ready. I rushed down and picked it up on the sat. When I got there Vince and John showed me around the car exp

It is absolutely brilliant! Still using any excuse just to go out and drive the thing some blurb and pics: For the benefit of some who asked about the stealth turbo: Firtly, I must say the level o

Here are some pictures of the pipework. http://i71.photobucket.com/albums/i129/cactusjackslade/ijpg